Rizal Techonological University (RTU) was established on July 11, 1969 upon the approval by the Secretary of Education in response to the utmost request of the Provincial Board of Rizal, headed by the Governor Isidro S. Rodriguez, to put up a higher education institution in the Province of Rizal. It was first known as the College of Rizal.

The College of Rizal opened its classes on July 14, 1969 with course offerings in business administration, education and liberal arts. On March 20, 1975, the College of Rizal in Pasig and Rizal Technical High School in Mandaluyong, both situated in the Province of Rizal, were merged and converted into the Rizal Technological Colleges by the virtue of Presidential Decree (PD) No. 674 The decree authorized the expansion of curricular programs and promotion of researches in the development and conservation of natural resources in the Province of Rizal. 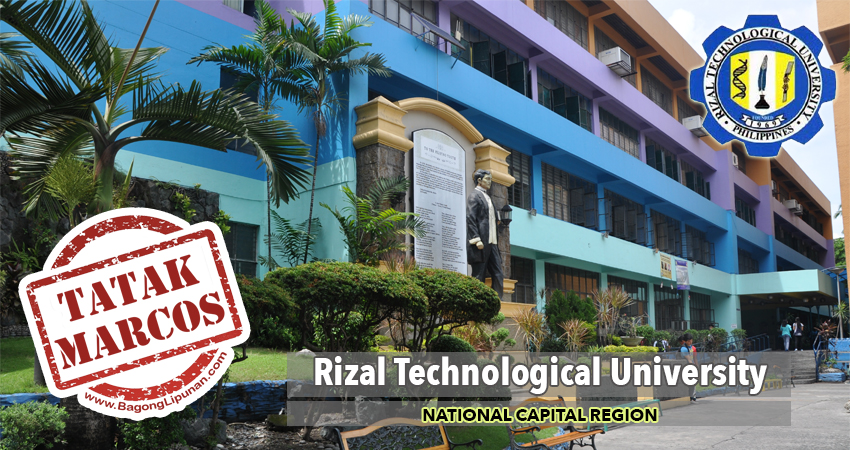 The promulgation of P.D. No. 751 on July 25, 1975 amended certain provisions of P.D. No. 674 and made the operation and maintenance of the Rizal Technological Colleges a joint project and undertaking of the Provincial Government of Rizal and the MERALCO Foundation, Incorporated.

This Decree broadened the support and strengthened the organization of the College. In 1975, upon the establishment of the Metropolitan Manila Commission, Pasig was transferred to the territorial jurisdiction of the MMC. The Province of Rizal could not continue supporting financially the Colleges. Several alternatives were proposed to save the RTC. One was to transfer the management and administration of the RTC to one of the existing towns in the Province of Rizal or Metropolitan Manila. The worst possible alternative was to phase out the Colleges. The leadership, the faculty, and the studentry of the Colleges would not allow this to happen, however, so they worked out the possible nationalization of the RTC.

Through the support of then Metropolitan Manila Governor Madam Imelda Marcos, the RTC constituency, with the Kabataang Barangay School Chapter of the RTC led by Dr. Jesus Rodrigo F. Torres, and the Collegiate and High School Faculty Clubs at the forefront of the struggle for survival, President Ferdinand E. Marcos signed into law Presidential Decree 1341-A on April 1, 1978 converting the Rizal Technological Colleges into a State College.
The decree, however, was received only on October 13, 1978; thus, the RTC has been celebrating its College Week, and later its University Week on the days centred on October 13. After 19 years, the College was converted into the Rizal Technological University on October 11, 1997 by virtue of Republic Act No. 8365. 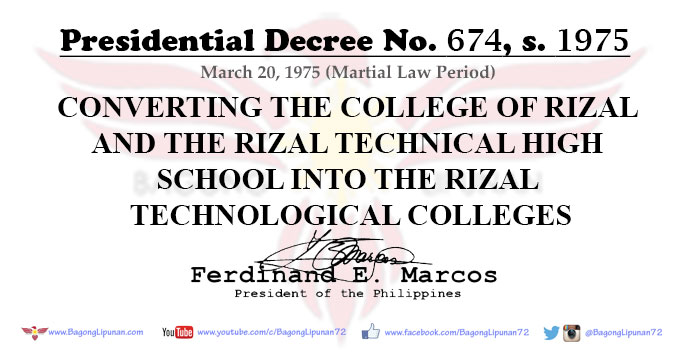