July 16, 2017 Catalyst Did You Know That (DYKT), Parks, Projects Neglected After Marcos, Tourism Leave a comment

Getting to know the builder of Marcos Bust

Anselmo, a third generation Ilongot of the Isinay stock, was born in Bambang, Nueva Vizcaya, northern part of the Philippines, on April 21, 1935.  He’s youngest of the two children of Ilongot farmer, Catalino and the former Maria Bayang, of the Igorot tribe.  Both parents died when the sculptor was in his infancy, leaving him and elder sister, Felisa, orphans. They grew up under the loving care of an aunt, Joaquina Day-ag. 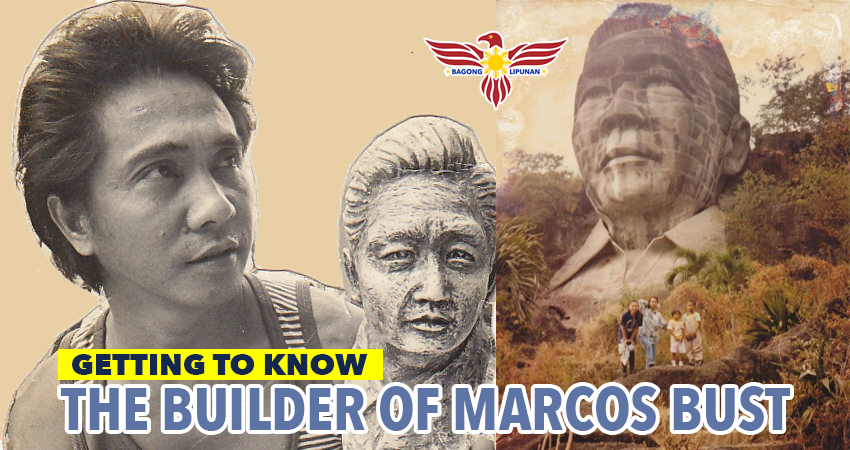 Young Anselmo spent his childhood in the scenic town of Bambang, profoundly affecting his inborn love of nature and artistic talent. He often hewed on barks of hardwood, using his left hand, immortal personages of history, legends and traditions taught to him by the elders.  His teachers tried to correct his inclination, that is, to use his right hand more than his left hand, but succeeded only in making him use his right hand too, for all purposes without decommissioning his left hand.  Thus, in his adult life, Anselmo’s art spilled out of his soul thru both hands, whichever was more convenient with angles, sides and tools.

Anselmo finished his elementary education in Bambang Elementary School.  He obtained his secondary education at, now known as, Nueva Vizcaya School of Arts and Trades.

Anselmo stowed away from home and came to Manila to pursue his dream of making it big in the field of art.  His inborn aptitude in art drove him to take up Fine Arts, majoring in Sculpture and minor in Ceramics, at the University of the Philippines.  He was a student of the Philippines’ foremost sculptor of modern times, Guillermo Tolentino, maker of the famous U.P.landmark, The Oblation and Bonifacio Monument, among others. His teacher turned Anselmo into an accomplished, imaginative, versatile sculptor.

He won several awards even before he received his diploma, the Magsaysay Award in Composition in 1956, and in the following year gained the second prize award in sculpture for a modernistic piece entitled, “gooze”. He obtained his Bachelor of Fine Arts degree in 1957, at the age of 23. 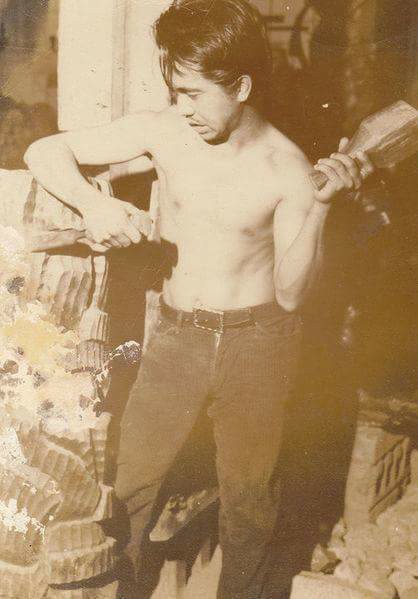 At 38, Day-ag had done sculptural pieces for parks, memorials, churches, government and municipal plazas, resorts, hotels, dining places, residentials all over the country,and in some parts of the world, using any of the medium he had chosen whether stone, wood, metal or synthetic material.

He had evidently derived inspiration from native themes and had actually developed a craft that strikes a distinctive balance between the conventional and the modern. He worked on variety of subjects — historical, mythical, romantic, legendary, religious — and the boldness and sweep with which they were done have led viewers to describe his creations as “monumental”.  Indeed huge, massive, and rough-hewn are adjectives that spontaneously come to mind when one views his works which were carved out of rocks and tree trunks. 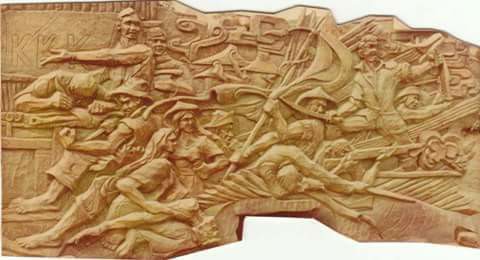 Anselmo’s passion for the religious was indeed a surprise to people who knew his background.  He tol his friends and associates:

“I do not think my religious belief influenced me in depicting Christ and other aspect of Christianity.”

His ability to interpret in wood the expression of Christ and His twelve disciples in his fifty five version of “The Last Supper”, for instance, stems from his passionate ” hero worship” of Christ.  He said that the perfect model for any artist should be Christ because of His universality.

Well known art critics and connoisseurs of the country that time dubbed him “the Carlos V. Francisco of Sculpture,” and they had been unanimous in their acclaim.  His works were described as “the outpourings of a genius.”

Anselmo was given awards, among them, recognition by the League of Philippine Architects for his valuable contribution in the enrichment of Filipino arts and architecture through his prolific creation of indigenous sculpture, utilitarian products and naturalistic lay-out that won him popular acclaim.  In 1970, he was elected President of the Sculptors’ Association of the Philippines. 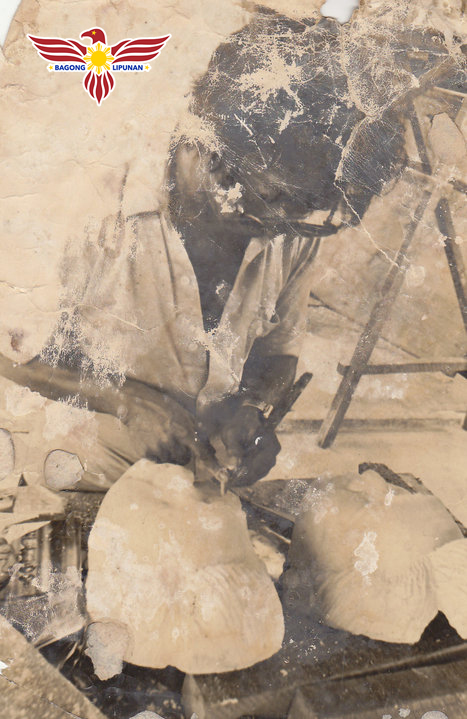 Anselmo working on the clay model of Pres. Marcos’ head.

Anselmo’s untimely death came, via, a mysterious road accident in Baay, Pangasinan, on September 20,1980, at 6 p.m.  He was on his way, from the then Ministry of Tourism project site in Hundred islands, in Alaminos, Pangasinan, to its another project, the biggest, and soon to be, and still now is, controversial piece of art he ever made, the monumental Marcos bust project in Pugo, La Union, when his Toyota land cruiser crashed into an unlighted mini bus parked along the road, killing the artist in a not so instant way, and injuring his lone passenger, his 10 year old nephew,Bambi, sitting on his right side of the vehicle.  It would take many years before the young boy would recover from the trauma.  Based on Police report, caused of death of the artist was internal hemorrhage, due to sudden impact.  He was 46 yrs.old. 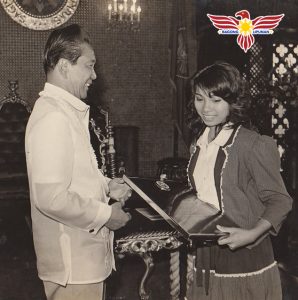 Posthumous award given by the Department of Tourism, with President Ferdinand E. Marcos as guest of honor, handling the award to Day-ag’s eldest daughter, Marie Grace .

It was a terrible accident that shook the lives of his young family, some did not recover at all.  So many unfinished works to be done, still in concept and in line to be designed, restudied, analyzed and adjusted to cater to all those who desired to enjoy the benefits of his art expertise when his Maker took him away.

Through exquisite works in stone, wood, metal and synthetic materials, Anselmo poured out his genius conveying through the steady song of his tools the drama unfolding around him: nature, history, folklore, religion.

Anselmo is the first Ilongot-Igorot native, of the Isinay stock, to rise to prominence on the contemporary art scene.  He’s one of the Filipino great men in sculpture who had developed into a figure of importance in the art world. 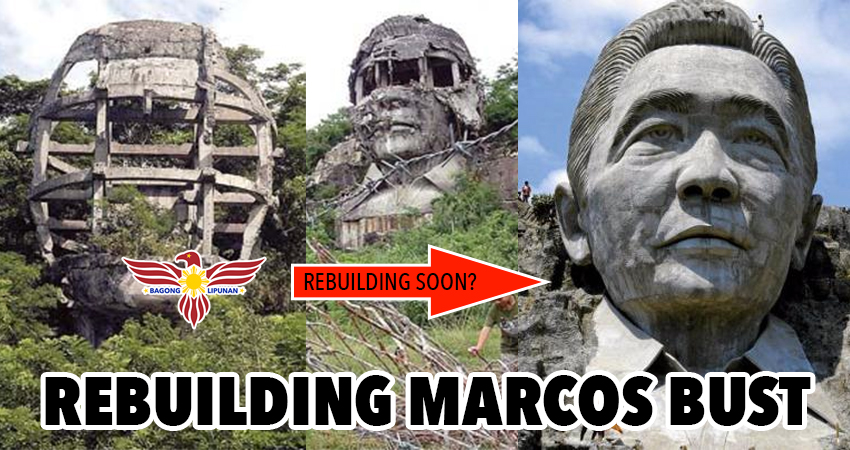